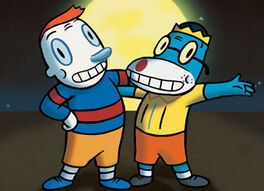 Teacher's Pet is a Disney animated series created by artist, Gary Baseman. The show is about a 10 year old boy named Leonard Helperman who has a difficult life of his mother being his fourth-grade teacher. When his dog, Spot decides to disguise himself as a boy named Scott Leadready II and go to school, Spot tries his best to help Leonard make it through life. The only problem is that Spot is getting all the attention, and often referred to being part of the cool crowd. Strange problems often occur throughout the school year. Despite this, they work hard to make it through together; not just as dog and master, but as classmates.

Since 2006, this show (like many other "Disney's One Saturday Morning" shows) has disappeared off the face of the earth, making it impossible to find any episodes. Fortunately for us, many people have recorded said episodes over the years and have uploaded them to YouTube.

Said recordings of "Teacher's Pet" remained on YouTube between Late 2008 and June 2013 until Disney took them down for copyright in June 2013. Despite this, many episodes were saved and uploaded to a specially made page on Facebook in September 2013 to avoid copyrights from Disney. All episodes have been found in different languages and uploaded onto Dailymotion (Started in January 2014), which includes English (39), Greek (1), Spanish (1), Russian (12, and the entire movie), and Tagalog (21) dubs. The movie has also been found and uploaded in Russian, Persian, Arabic, and Polish Dubs.

We need your help though. If anyone happens to have any other episodes that were on YouTube, on their hard drive, or if they happen to have other episodes on old VHS tapes or whatever, I urge you to go to this address to send a message about it. Until then, enjoy these free episodes of Disney's Teacher's Pet.

UPDATE #1: As of September 21st, 2015, the missing episode "The Flipper" has been recorded in a Filipino dub and has been uploaded to Dailymotion, with the missing 20 seconds reinserted in. Every episode (In different languages) are now online for your viewing pleasure.

UPDATE #2: As of January 5, 2017, the Second Season is currently airing every Thursday morning (9:30 AM) on the Malaysian channel TV3; and the channel is playing the English Dub and is in it's original widescreen format (Although it's mushed to fit the 4:3 Format TV3 airs as). All episodes that have been currently recorded have been uploaded to the Facebook page.

UPDATE #3: "The Flipper " finally aired on TV3 on June 8th, 2017, and the English version is now available online.

UPDATE #4: "The Blight Before Christmas" also aired on TV3 on June 15th, 2017, and the English version is finally online after over a decade. Aside from some episodes missing small clips due VHS recordings, we have every single episode available online!

UPDATE #5: For a special event for Disney Movie Club members, select episodes have been shown on the Disney Animation Studios lot, along with other ABC Kids shows.

UPDATE #6: The entire series was added to the Disney Plus service on Day One. Unlike the "Pan and Scan" recordings found online, the series is shown in widescreen, as it was originally produced.

Community content is available under CC-BY-SA unless otherwise noted.
Advertisement